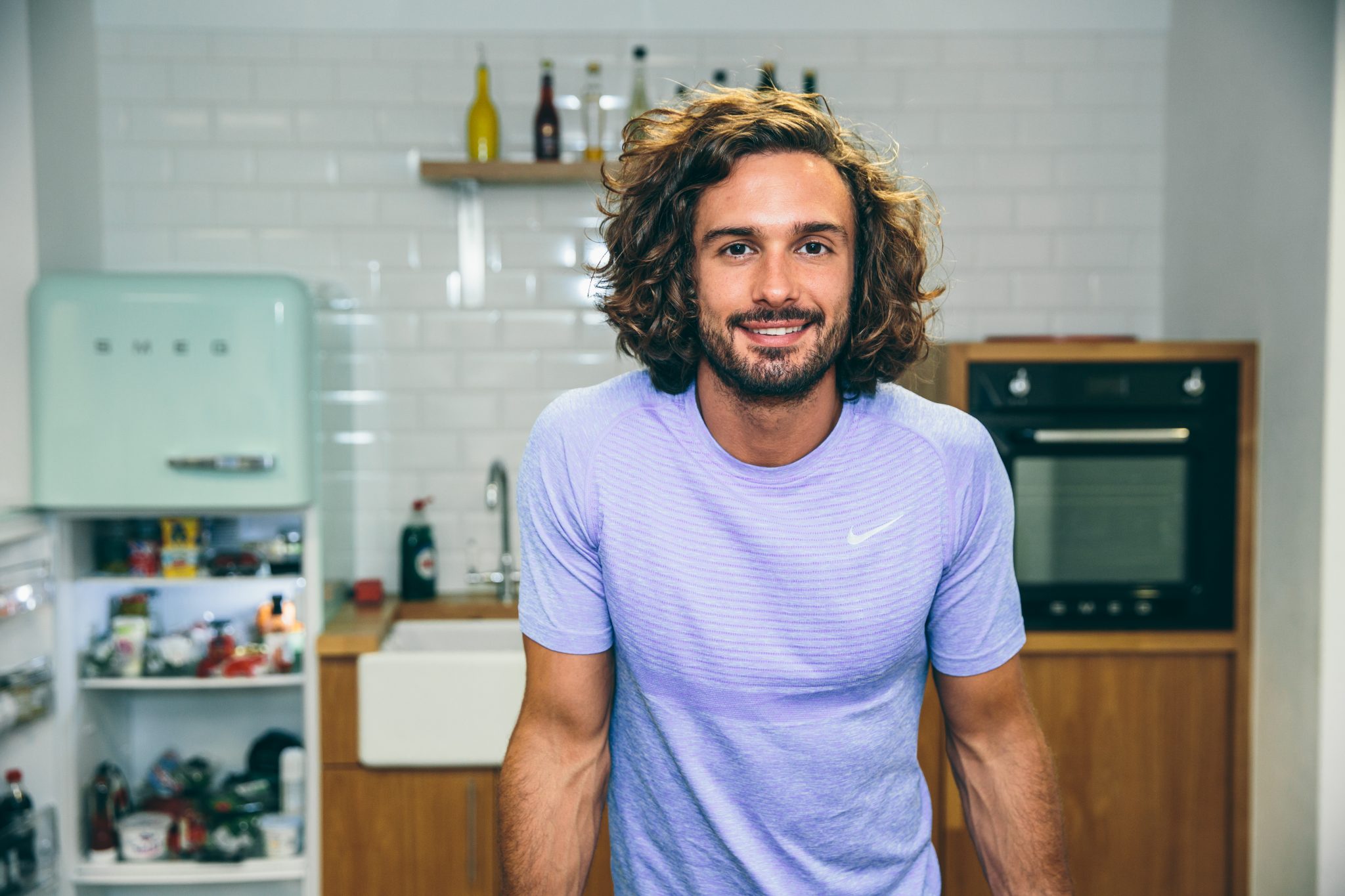 We’ve never experienced more envy over a celebrity interview than this one. Responses from friends ranged from ‘Text me IMMEDIATELY after to tell me what he’s like!’ to ‘I hate you, your job is not a job’ to a dreamy-eyed ‘I bet he’s just the loveliest.’
And this was from both men and women alike. People love Joe Wicks. Which is why he’s shot to success as if strapped to a rocket. He completed a hat trick last year by simultaneously occupying the number one, two and three slots on the non-fiction chart. His dedication to ‘midget trees’ have seen the sales of broccoli in the UK increase by 25%. And he’s ranked the 5th most influential fitness name in the world by Forbes. Not bad for a lad from Surbiton who grew up on a council estate.

Joe has gained a reputation in the press for having a puppy-like personality. With good reason. He bounces into our conversation with infectious energy.

Joe: ‘I hear you’re putting me on the cover?’
TLL: ‘But of course, where else would we put you?!’
Joe: ‘I dunno, maybe inside the very back page?’
TLL: ‘Nah, you warrant a cover.’
Joe: ‘Am I gonna have my top off?’
TLL: ‘No, you’ll have a t-shirt on, we read that you’re tired of taking your top off?’
Joe: [laughs] ‘Well, it’s just, y’know, I wanna be taken seriously, I want to be known for my curly hair rather than my abs.’
TLL: ‘For your intellect rather than your biceps?!’
Joe: ‘Exactly. Besides, now I’ve hit my thirties I just want to let it all slide. Maybe I’ll re-brand myself as….The Chubby Coach…. yeah! Er, you’re not going to grill me like Piers Morgan did, are you?’
TLL: ‘Oh God no, We saw that on YouTube.’
(FYI, Piers pushed Joe hard on the ‘is there a woman in your life?’ question on Good Morning Britain, while Joe grew increasingly uncomfortable. Viewers complained vociferously on Twitter, burning Piers with tweets such as ‘Morgan is behaving like a 7 year old on Haribo this morning’.)
Joe: ‘Don’t be like him, be nice and gentle.’
TLL: ‘We will, We’ll be gentle, swear.’ 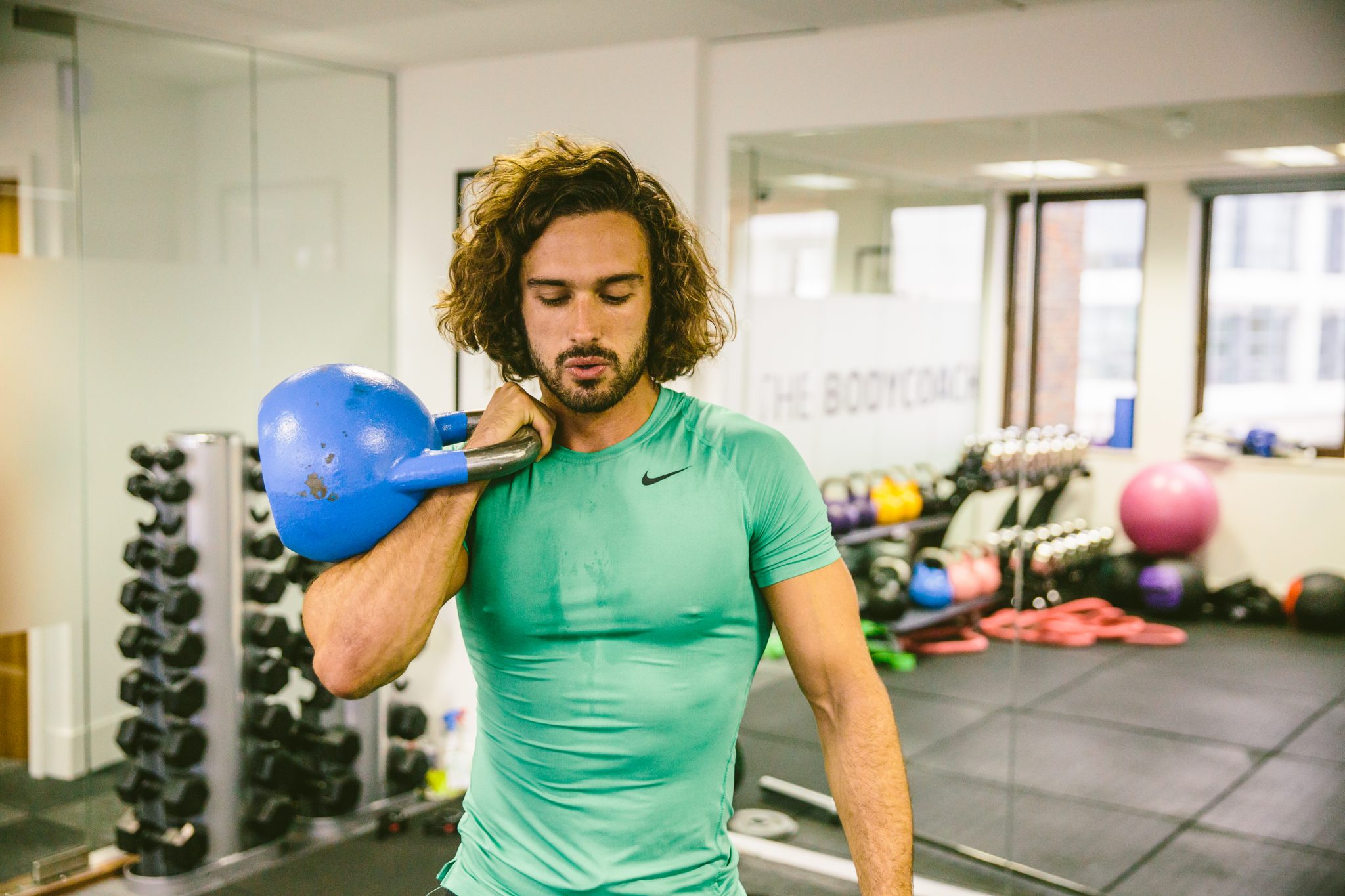 As you can see, Joe is a total gas; funny, self-effacing and charming. He’s been dubbed the ‘Jamie Oliver of fitness’ with good reason; like Jamie, he’s got the nation eating out of his hand with his brand of down-to-earth, cheeky wisdom. He’s inspiring, but never preachy. Motivational, but never annoying.
His new book, Cooking For Family & Friends, is all about how to ‘smash’ a dinner party, as Joe would say. We wonder, what would his ultimate dinner party be, if he could order one up from a genie? ‘Ooh, good question. I’d be in Jamaica, with my best mate, brother, my nephew Oscar. They all make me laugh every day. Listening to Bob Marley. On the beach, drinking frozen daiquiris, tucking into caribbean curry with rice and peas, while corn and ribs simmer on the BBQ. We’d have been paddle boarding and snorkelling that day. Ahhhhh, lovely.

‘I’d be in Jamaica, with my best mate, brother, my nephew Oscar. They all make me laugh every day. Listening to Bob Marley. On the beach, drinking frozen daiquiris, tucking into caribbean curry with rice and peas, while corn and ribs simmer on the BBQ”.

Joe’s risen from obscurity; from filming 15 second vlogs from a humble flat in Surbiton going out to a handful of followers, to shifting millions of books and watching his face sail down Oxford Street on the side of a bus. What other pinch-himself moments has he experienced? “The one that tops it all is still when I signed my book deal. Oh, and when I got my TV show! I wasn’t great on TV to begin with, it was weird being on a set at first and learning lines. Back at the beginning, it was just me filming myself with my phone, so when you’re on set with a crew, it’s a bit more… intense. But I’m much better now.”
He’s enjoyed a huge success with his real-time 15 minute Facebook work-outs. “I think it’s because people can see that I’m out of breath and sweating too, so there’s a ‘c’mon, let’s do this together’ feel to it. I really want to reach the people who never exercised as kids, to be the little motivator in their ear. To say to them, ‘so you didn’t do all your reps, never mind, have a little rest and give it another go.’ Even if people hate the gym, they can always find something they love, whether it be cycling or yoga.” 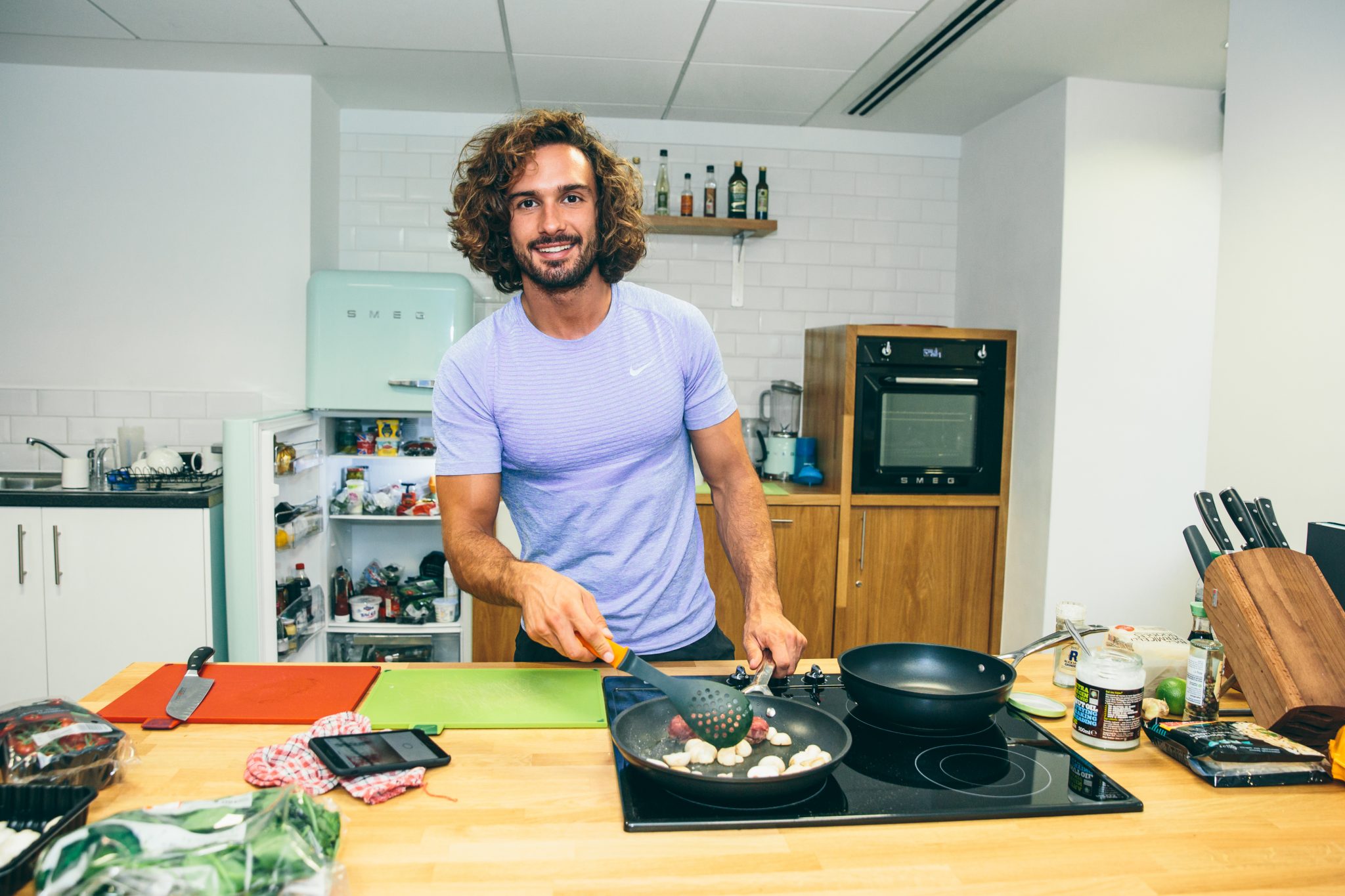 Another reason Joe’s approach has taken off, is that he believes food is to be enjoyed, not forbidden and fetishized. “It’s nonsense that you can’t eat carbs and get lean. Your body loves carbs after you train! That’s the exact right time to treat yourself to a bagel, or white rice, or oats, or whatever your craving is. It’s also silly to say that you can’t eat butter, or eggs, or avocados; of course you can. When people are on those points-based plans they’ll skip meals so’s they can have a glass of wine, or they’ll grab a ‘low-fat’ cereal bar. It’s misleading and really confusing. Your body needs real food. You can’t live on those restrictive diets for more than six months. Long-term tweaks are the key, not short-term crash diets.” If he could, he says he’d wave a magic wand and “ban those replacement shakes, sugary cereal and all of those ready meals blasted with hydrogenated fat.

“People do write funny comments, such as how they would love to marry me, but hey, girls get the same when the post pictures of them in swimsuits. I don’t think too much of it. It doesn’t affect my self-esteem either way”

But with great fame, comes great fascination. What does he think about the press and public’s emphasis looks? I tell him that The Guardian recently described him as looking ‘like Jon Snow would if he left Game of Thrones and spent the summer as an Ibiza club rep.’ Joe laughs in a horrified way. “Did they?! Honestly? After an Ibiza season I would imagine people look gaunt, freaked out and manky after smashing a load of booze! I’ve heard the Jon Snow comparison loads of times, but I’d much rather be ‘Jon Snow after a boot camp!’ People do write funny comments, such as how they would love to marry me, but hey, girls get the same when the post pictures of them in swimsuits. I don’t think too much of it. It doesn’t affect my self-esteem either way.”

Does he feel the need to keep up appearances and look hot all the time? “Nah, not at all, I walk around Richmond in trampy tracksuit bottoms. But, having said that, the accountability does help keep me fit. Even if I wanted to have a month of eating crap, I wouldn’t do it, because I want to show people that this is a great way of life.”

Indeed, accountability is a cornerstone of his program, with him encouraging people to chuck away the ‘sad step’ (his brilliant name for the bathroom scales) and focus on progress pictures instead. The befores and afters printed in his books, from very real people, are remarkable. “There’s nothing fake or photoshopped. People hate their first picture with a passion, but then they’re so madly proud of their pictures in month two or three, that they often want to share them. This then inspires others that they can do the same.”

As we already know, Joe is famously private about his love life, but that protectiveness doesn’t mean they don disguises in public. “My girlfriend and I are totally normal, we walk around holding hands, we get the train into London together. We just don’t post pictures of us together on social media. She knows I care about her, so I don’t have to parade our holiday shots or hashtag things with couplegoals. Even when close friends do that, I find it really cringe. Why are they showing that off, it’s private?! And then a couple who seemed like the happiest couple ever on social media, suddenly break up. It’s weird. I also want to protect her from the inevitable comments, saying stuff about her. Until I have a kid and I want to say ‘this is my family’, I’ll keep my love life locked down. We’re happy in private.”

Joe is only 31, which seems remarkable considering all he’s achieved. What does he want to do with his thirties? Well, apart from his ‘Chubby Coach’ aspirations, obvs. “Y’know, I noticed that when I hit 30 I felt way more relaxed in my own skin, more content somehow. I think you worry in your twenties what people think of you. Now I’m like ‘I know what I’m here to do. I’m here to get people fitter and healthier.’ I’m definitely going to work with the NHS and with schools to get kids exercising. As long as I stay humble and true to my message, I reckon I’ll be alright.”
Alas, our time has ticked away. So, we have to wrap Joe up.
TLL: “It’s been a pleasure Joe, thanks for your time”.
Joe: “No, thank you for your time.”
What a legend. 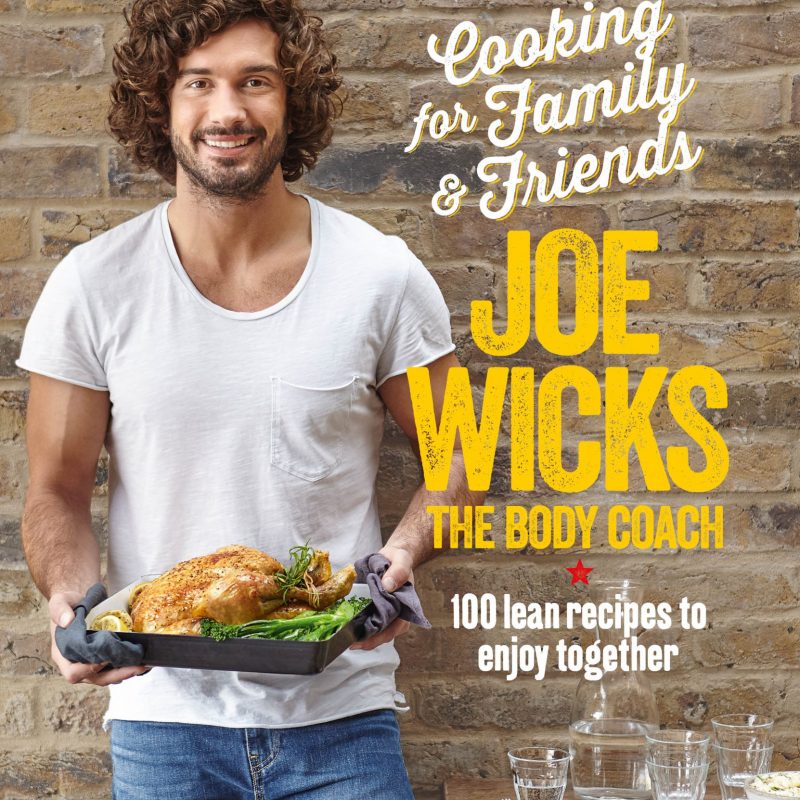